This week’s GTA Online update has revealed a brand new legendary podium vehicle. There also garages on sale and many new discounts and bonuses waiting for you in Los Santos.

Rockstar’s latest weekly update is here for GTA Online. As usual, they’ve made changes to the available bonuses, log in rewards, and discounts. You’ll also get a brand new casino rewards vehicle and online event.

This information was revealed by the reliable TezFunz2. Here are the November 22 GTA online patch notes.

The Benefactor BR8 is this week’s free vehicle that you can win at the podium wheel. You can take home this Legendary Motorsport without spending a dime, a great deal considering it usually costs $3,400,000. Just try your luck at The Diamond Casino & Resort.

This sports vehicle has KERS that grants you a brief boost in speed, much like the Vindicator. You can recharge the boost by slowing the BR8 for just 6 seconds.

There are new weekly bonuses and incentives as you will get 3x GTA$ and RP on:

You will also get 2x GTA$ and RP on the newest GTA online event by playing Open Wheel Races. This event is available until 8:00 a.m. GMT on December 10.

You can log in this week to collect the following rewards:

If you have a PS Plus subscription then you will get $1 million just for logging in during November. So if you haven’t claimed this reward then be sure to get it before the month ends.

Coming to this week’s discounts, you will get 40% off:

In addition to this, you will also get 30% off a few other vehicles and services:

That’s all the discounts in this week’s GTA Online update, so be sure to jump into Los Santos and make the most of them while they last.

GTA fans have discovered a Rockstar patent that creates dynamic and complex NPCs to try and make the best NPCs possible in GTA 6.

A new patent by Rockstar, to potentially use in GTA 6, has been discovered that will make the best NPCs and make them more complex and intelligent.

It’s been over seven years since GTA 5 first graced the gaming world and there’s still no official word that the 6th game is in development. Every passing day leaves GTA fans emptier and to fill this void, they are trying to find every bit of information they can.

“Their internet sleuthing seems to have uncovered an extremely interesting patent from Take-Two, which could have a major impact on NPCs in their future titles. Rockstar are well-known for filling their open-world games with as much detail as possible, and it appears that non-playable characters could be receiving a major upgrade moving forward.”

The patent, titled “System And Method For Virtual Navigation In A Gaming Environment” patent appears to show a complex set of decision-making algorithms that would affect how NPCs behave around each other and playable characters.”

There is also further evidence to suggest that this is a system to do with a potential new Grand Theft Auto game. The inventors are Simon Parr – Lead AI Programmer at Rockstar Games – and David Hynd – Associate Director of Technology at Rockstar Games.

Information about the patent was posted recently in a Reddit post and discussed by several users. The new system allows NPCs to be more dynamic and complex. You’d imagine the hope is that every player that plays GTA 6 will have new experiences and the world will feel different every time they step foot in it.

Rockstar is never one for settling for anything less than the best. So it’s entirely possible that we don’t hear anything official about GTA 6 for a long time yet.

In the meantime, fans will continue to speculate on the latest rumors such as GTA 6 having a female main character and strange files that further hint at the existence of the long-awaited sequel.

Once official information starts to trickle out about the game, we’ll report it here.

How to GTA V roleplay, who to watch, and more

Grand Theft Auto V’s roleplay mod lets you craft your own story in Los Santos, and we’ve listed some things to keep in mind while playing.

Twitch streamers have started dedicating more time to Grand Theft Auto V’s roleplay mod, which is surging in popularity as a result. Here’s everything you need to know about it before jumping in.

GTA V roleplay is a multiplayer mod that PC players can use to play Grand Theft Auto V as NPCs. This is highly customizable and gives you a huge amount of control over the story you craft for yourself in Los Santos.

Many popular Twitch streamers have made this mod so popular that its servers have returned. It can be a bit confusing if you’re trying it out for the first time, so we’ll go over everything you need to know about GTA V roleplay. 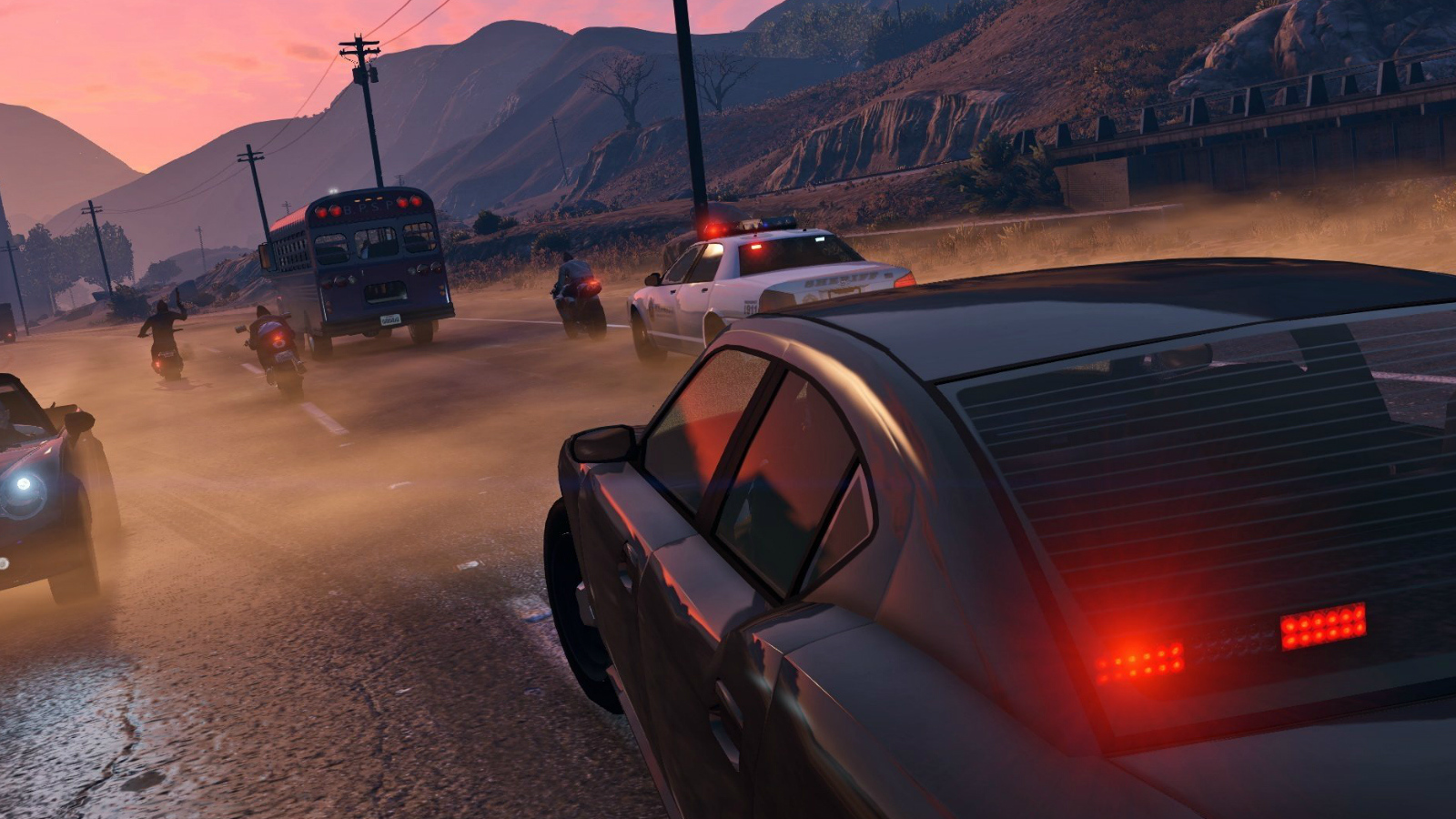 If you own a copy of GTA V on PC then you’re eligible to play the RP mod, but you can only access it via modified games clients such as FiveM and Grand Theft Multiplayer. You can join the server once you’ve made your way there.

You can also earn yourself an invite by roleplaying exceptionally well. This will grant you access to certain exclusive communities, and you’ll soon find yourself rising in popularity. For this reason, you’re encouraged to be as creative as possible.

Certain servers take their roleplaying more seriously than others, with specific rules being set in place. If you find yourself in one of these, you’ll have to ask for tips on how to access menus or perform specific actions.

How to join a GTA V RP server

As we mentioned before, aside from a few open servers, there are some high-level RP ones that require invites to join. If you want to start, then you can head over to their forum or website and then sign up to join them.

Keep in mind that many of these are extremely difficult to get into, and you’ll have to be a particularly talented roleplayer to gain entry. NoPixel’s GTA V RP server is one of the most exclusive ones, and it receives a high amount of applications.

You can also try your luck with other popular servers such as the ones by TwitchRP, Mafia World, and Rage. Be ready to commit to your character if you’re serious about joining these, and don’t break the roleplay.

This mod’s recent surge in popularity can be attributed to popular streamers such as Jaryd ‘Summit1g’ Lazar and Saqib ‘Lirik’ Zahid. Both of these players drop into GTA V RP from time to time and play with their own unique characters.

We recommend that you watching others play first, so you can get a better understanding of how this mod works before jumping in yourself. You can check out some players on Twitch, and see how they go about crafting the roleplay.

That covers everything you need to know about Grand Theft Auto V’s roleplay mod. We hope that this guide has been helpful.

How to find Cayo Perico Treasure Chests in GTA Online

Rockstar Games have added Treasure Chests to GTA Online as part of The Cayo Perico Heist expansion, and you can find them daily.

There are daily Treasure Chests hidden in The Cayo Perico Heist update that are worth $15,000 each, and you can find these when logging into GTA Online. Here’s how you can get your hands on them.

The Cayo Perico Heist brought brand new opportunities for earning money when it went live on December 14. The actual payout of the heist is impressive, and there are also other commodities that can earn you some extra cash such as gold bars.

Aside from doing missions and objectives, you can also find Treasure Chests when exploring the island of Cayo Perico before the heist. These are easy to find, and each one you come across contains $15,000.

You can find two Treasure Chests daily when logging into GTA Online. One will be lying on the island, while the other can be found just off-shore in the water.

The game will notify you when you’re near one of these with the sound of bells ringing as you get closer to them. Just follow the sound until you see a prompt on-screen that lets you know that it’s time to open up the Treasure Chest.

Here’s how you can find them:

There are 10 possible locations where the chests can spawn on land, and these change every day. Luckily, YouTuber GTAMen has already compiled all of them on the GTA Online map.

Finding the ones that are underwater works the same way. The only major difficulty that arises is having to come up for air every few seconds after you dive into the ocean. For that reason, you should keep some rebreathers on you.

Just keep swimming towards the sounds of chiming bells until you get the prompt that tells you to open the Treasure Chest. GTAMen also went over all the underwater locations for these in another video.

So far, the Treasure Chests only rotate between these select locations. This might be subject to change later one, but right now you can find them by exploring these areas on the map daily when playing GTA Online.

Be sure to explore Cayo Perico as there are a ton of other fun activities and money-making opportunities at your disposal. GTA V’s first-ever map expansion has a lot of exciting content to offer, and it’s up to you to try it out.

How to find and kill Predator in Fortnite Season 5

You can battle The Predator after the latest Fortnite update, and defeating him will grant you the Predator skin.